Chris Stringer’s Lone Survivors: How We Came To Be The Only Humans On Earth (2012) 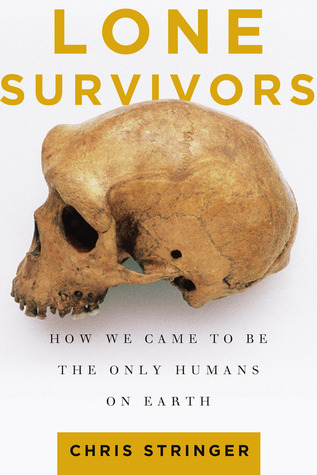 Out of all our ancestral hominin species, why are Homo sapiens the sole survivors? Paleoanthropologist, Chris Stringer, addresses this question through a series of fossil finds, genetic tools, and dating methods from archaeological excavations. Although this publication is five years old, it is still relevant in regards to recent research concerning the analysis of interspecies genetic exchange and the ground-breaking research of Neanderthals and Denisovans. These rapid discoveries are one of the reasons why our modern understanding of human evolution is constantly altered.

For readers who wish to enter the world of physical anthropology, this is a great way to start! Stringer thoroughly explains all anthropological terms, theories, and procedures in in a comprehensive manner. He takes the reader on a narrative journey of human evolutionary theory from Darwin’s time to today whilst highlighting our ancestral path from Australopithecus anamensis and beyond. While acknowledging both the ‘multi-regional’ and ‘out of Africa” models, Stringer challenges these concepts by presenting his new theory. Based on archaeological and genetic evidence, he argues that human species coexisted across the African continent which led to inevitable competition. This caused exchanges of genes, tools, and behavioral strategies between multiple populations. Recent fossil discoveries, particularly in relation to Neanderthals, fit within Stringer’s proposed model.

Aside from a detailed history of human origins, Chris Stringer presents a contemplative question: What makes us modern? Is it our cultural customs or our invention of tools? Although he offers his own understanding of the question, he urges readers to develop their own interpretation. An ideal way to conclude this book. I began to think– how are we currently evolving as a species?

I believe evidence of our current evolutionary path reside in the loss of our wisdom teeth, in our genetic resistance to some diseases, and in the presence of the LCT gene through adulthood.

Hell, if we aren’t careful with our overconsumption of a sugar-filled diet and our growing dependence on technology, there is a small possibility that we may evolve into the horrid figures pictured in WALL-E (2008).

Where do you see evidence for our modern evolution?

a primate of a taxonomic tribe ( Hominini ), which comprises those species regarded as human, directly ancestral to humans, or very closely related to humans. This includes members of the genera Homo, Australopithecus, Paranthropus and Ardipithecus.